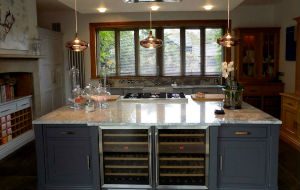 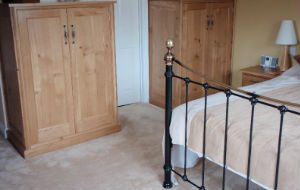 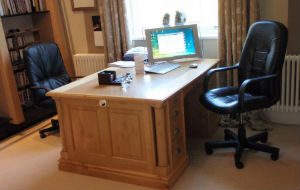 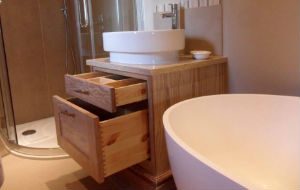 Last autumn, as part of an extension to my house, I instructed Chris Doyle (Rose County Interiors) to design and fit a new kitchen. A kitchen which incorporated some of the original units and fittings he had constructed and installed some fourteen years ealier, when the house was first built.

Although quite late on I decided upon modifications to the agreed layout, Chris was sufficiently flexible to embrace the changes without any delay to the planned completion. He started both the removal of the old kitchen and, subsequently, the commencement of the new installation on precisely the agreed dates.

It was a pleasure to have Chris and those he employed working in the house. At all times they were most considerate and always tidied up as they went along, causing minimum disruption. Throughout he kept a careful check on what his team were doing and visited regularly to provide personal supervision. He was also at pains to make sure that, as the work progressed, I was happy with all aspects of what they were doing.

In short, no aspect of the work could be faulted and now, six months later, I remain delighted with the final result.

Having been recommended to Rose County Interiors by a business acquaintance, our expectations were high.

Chris and his team consistently exceeded these expectations.

From our first drawings through to completion, Chris demonstrated a real understanding of our requirements. Nothing was too much trouble and the pride demonstrated in the job ensured everything down to the smallest detail was completed to the highest standard.

Add to this, a team who are completely trustworthy, a pleasure to have around and who deliver excellent results and you need look no further.

We have no hesitation in recommending Rose County Interiors to anyone.

Having spoken to countless other kitchen designers who only saw problems with the room, we spoke to Chris; instead he saw these issues as an opportunity to introduce interesting features that have added to the uniqueness that a bespoke kitchen represents.

Amazing service, workmanship and consultation has combined to leave us with a well thought out and brilliantly crafted kitchen. Couldn’t be happier. Thanks!

Rose Country Interiors were recommended to us by a friend of a friend. We had already had several designs created by other companies but none of them really met our vision or budget.
We wanted a modern feel but in traditional materials which would complement our period home. Once we met Chris and viewed some of the kitchens he had made we were so impressed with the quality we were sure he could deliver our dream kitchen.

We are completely delighted with our kitchen and still can’t quite believe we own something so beautiful. Chris from Rose County really listened and responded to our ideas and requirements and has provided us with a perfect handmade kitchen which is of the highest quality in a totally unique design.

We had some delays with the building work and Chris removed lots of the stress by storing our kitchen and then completing extra work on the room so our kitchen not only fitted perfectly but had the modern look we were after.

We would highly recommend Rose County as nothing was too much trouble and Chris is a perfectionist which means you are sure to be pleased with the quality of the materials and his workmanship. We’re delighted thank you.

Rose County Interiors under the expertise of Chris Doyle and his team installed a handcrafted oak kitchen in our barn conversion.

I was so impressed with the high standard of the work undertaken that I commissioned the company to work on a design for our galleried study area. The approach was professional, friendly and helpful. All of my ideas were incorporated and Chris achieved an original and innovative design for desk and cupboard units that enhanced all the existing features of the low vaulted ceiling. The units were made to a high specification and installed within the agreed timescale. Any minimal aftercare work was carried out rapidly and efficiently.

We’ve known Chris Doyle for over 12 years, he is totally reliable, a real perfectionist AND he can be relied upon to come back if something is not working properly. The top man for kitchens in Northants.

This is the fourth project that Chris and the team have completed for us. Every aspect of the service Chris offers is exemplary, from initial consultation to design to final finishing touches. The quality of the craftsmanship is superb and every project has been completed on time and exceeded my expectations. Thank you everyone at Rose County!

Chris and his team have made a beautiful library, that has fast become my favourite room in the house! As usual the attention to detail is second to none. It’s always a pleasure to watch a project come to life in the hands of ‘Rose County’

Chris and the team have been doing projects for me for 17 years. Their work is of extremely high quality and I would highly recommend them.

We would like to thank Chris and his team for an amazing job on my husband’s Home Office.

Chris has done 2 kitchens for us. Our first 11 years ago and now a new one. Both have been beautiful, really well finished. Great service, communication and ideas. Would thoroughly recommend them. Brilliant, thank you!

All of the services we provide are carried out to the highest standard.
Get in touch for more information.